Big Art Group’s 10th Anniversary TAKE OVER at Abrons Art Center is 2 weeks away (April 15-18, 2010) and we are releasing The Sleep album online! Click below to listen to the newest track “Bronze”. Music is by Theo Kogan, Sean Pierce and Jemma Nelson. 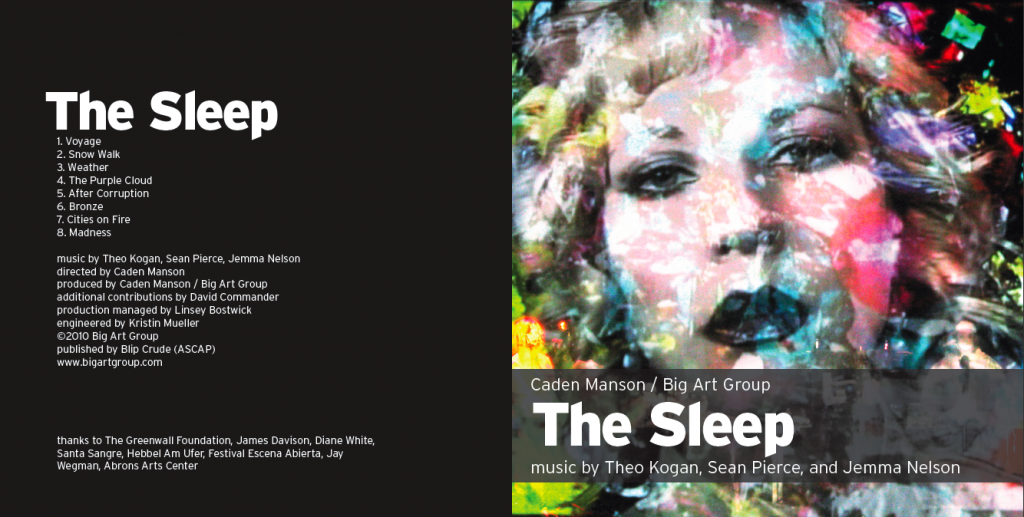 Tickets on sale now for The Sleep and Flesh Tone – Part of the Big Art Group TAKE OVER at Abrons Art Center April 15-18, 2010.

The Sleep mixes early cinema techniques, magic lantern, concept album and Big Art Group’s Real Time Film technique into a live see-though movie adapted from M. P. Shiel’s 1901 story, “The Purple Cloud,” in which a lone explorer races to the North Pole while a poison purple cloud covers the earth. His subsequent return to the remnants of civilization drives him into a crisis of being, in a classic “last man” adventure that eerily presages catastrophic climate change. Live music by Theo Kogan, Sean Pierce, and Jemma Nelson. Supported by the Greenwall Foundation.

Big Art Group’s new project Flesh Tone is told through hybrid, hallucinatory storytelling influenced by steely Hollywood thrillers and filtered though the company’s breathtaking mediated performance techniques, Real Time Film and Green Screen Performance. A character-driven critique of the American way of looking at the world, Flesh Tone turns the visual economy of the US into an acid bath of self-exposure. Confronting social issues of economic and environmental degradation, a war-scarred national psyche, and transformed bodies, Flesh Tone queries Image-America about a possible path to reconciliation with its own monstrous reflection This live performance spans cinema, visual art, and spectacle in an utterly unique, compelling event.

Flesh Tone returns to the conceptual and performative model of Real Time Film and Live Green Screen Performance technique the group pioneered in 2001 with its trilogy of works Shelf Life, Flicker, and House of No More. Flesh Tone delves deeper into the techniques and the questions these hybrid forms raise, moving beyond the Film-Theatrical hybrid of the group’s earlier works to create a theatre of mediated information in which action, re-enactment and special effect create a participatory spectacle with the “active editor” audience member. For Big Art Group, the theatrical event is based not on illusion, but on a synthesis of simulation and impersonation, on the ritualized action of recreating a readable, multi-layered Image Theatre.