This book articulates the first theoretical context for a ‘cyborg theatre,’ metaphorically integrating on-stage bodies with the technologized, digitized, or mediatized, to re-imagine subjectivity for a post-human age. It covers a variety of examples, to propose new theoretical tools for understanding performance in our changing world.

JENNIFER PARKER-STARBUCK is a Senior Lecturer in Drama, Theatre and Performance Studies at Roehampton University, London, UK. Her essays on bodies, animality, and multimedia have appeared in a variety of books and journals including: Theatre Journal, PAJ, Women and Performance. She is an Assistant Editor of PAJ and an Associate Editor of the International Journal of Performance Arts and Digital Media.. 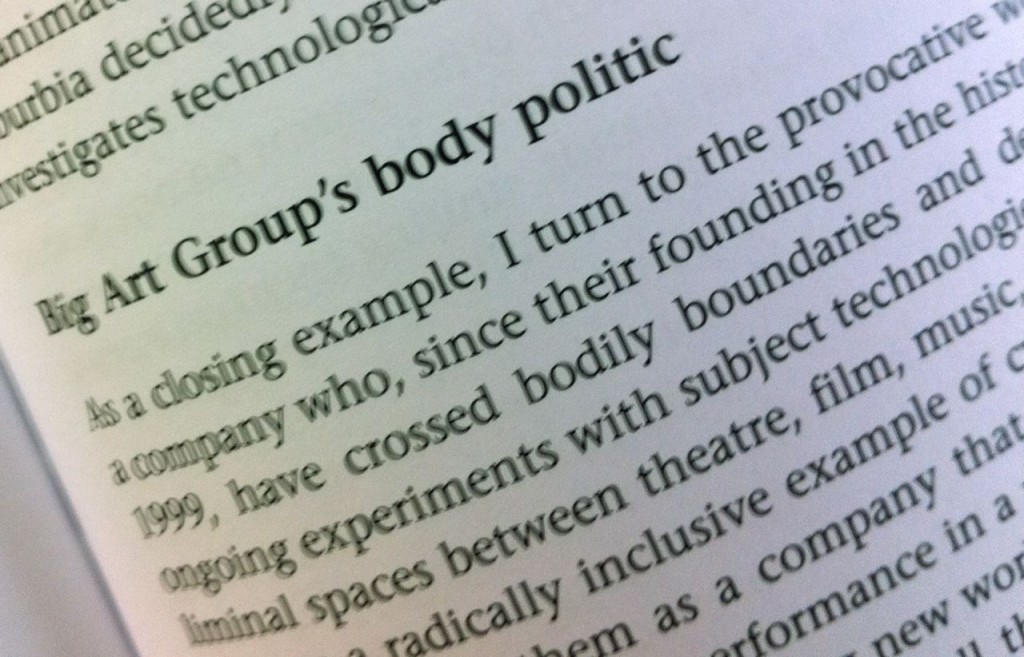 Big Art Group is currently editing and preparing video interviews we created with Bay Area participants during our residency at Headlands Center For The Arts this past Spring. These videos will be incorporated into the live video action performance of The People in and on the facade of Z Space in San Francisco co presented by Yerba Buena Center for the Arts September 16 & 17 2011.

YBCA and Z Space welcome New York-based performance troupe Big Art Group back to the Bay Area with their new work, The People: San Francisco, a site specific, outdoor extravaganza that combines live theater with large scale, real time video projection. The narrative, constructed from interviews with members of the local community who voice their thoughts about democracy, war, terrorism and justice as it relates to their personal histories, loosely recreates the story of Aeschylus’ Oresteia. Live theatrical reenactments are intercut with earlier, taped interviews, projected via large scale video onto the side of a building where the live play and video are viewed by the audience at street level. Perceived as a kind of “living television,” The People repurposes commonly used media strategies such as video clips, interviews and re-enactments, to explore extraordinary forces reshaping contemporary government. It then sculpts these developments into a performative action that takes as its inspiration the foundational idea of community dialogue and the birth of democracy as theatrically embodied in the Oresteia. By inverting the established relationship between “mass-media” and private exchange, it transforms the “town square” into a public performance in which both performers and audience act out crucial roles in the construction of self-government.

The People: San Francisco is part of a larger cross-cultural work in which the video choruses from each location will be combined to create a window into the cultural understanding and variation of democratic public expression. To date, three productions in the series have been presented: The People—Italy, which took place in Polverigi, Italy with the participation and support of Inteatro Polverigi in 2007, The People—Germany, at Theatre der Welt 2008 in Halle, Germany, and The People—Austria at Szene Salzburg in 2010.  (from YBCA website)

ABOUT THE PIECE
In The People, the subjects are simultaneously audience, creators of their own scripts and actors in their own stories. The performance itself is site specific; it takes place in a public plaza using storefronts, houses, or office buildings. The space becomes the arena where the private meets the public, where the established order is inverted.

The creation of a production of The People takes place in three stages. First, approximately thirty local residents are chosen to be interviewed for the project. They are filmed being questioned by other residents on their thoughts and opinions about the chosen site, the town and their community. Drawing from this extended discussion, which also incorporates such themes from the Oresteia as personal history, democracy, war, terrorism and justice, their answers provide the basis of the production.

For the performance, the audience stands outside a chosen building. Within the building an unseen interviewer asks scripted questions to the participants inside as the audience watches a live, simulcast five channel video projection of the action on the façade of the building. What begins as a simulation of a spontaneous interview spills out into the street as a contemporary epic narrative, as the participants embody the characters of the Oresteia, revealing metaphors that turn ordinary, quotidian acts into theatrical expression. Spliced and edited onto the exterior of the buildings with the live theatrical play are the previously recorded interviews that act as video choruses.

The People is at once a component of a large-scale cross-cultural performance project and an original creation in its own right, exploring the relationship between performance, community and action. It takes place with the involvement of the local community in which the participants of the play are members of the public, creating a link between their personal stories and the realm of the epic, to shine a light on the relationship between the individual and the democratic process. It draws from classical traditions and Greek Tragedy as well as contemporary modes of mediated expression.